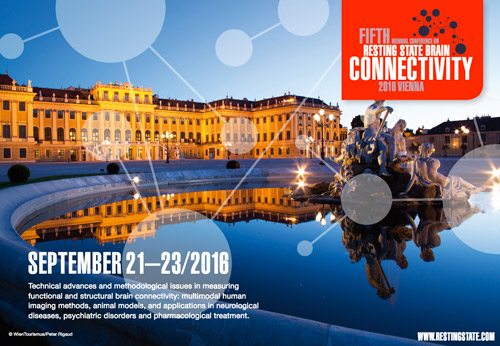 The Biennial Conference on Resting State / Brain Connectivity has, since its inception in 2008,
been the leading conference on resting state functional connectivity MRI. It is the major forum
for scientific discourse and interaction on human brain connectivity.

The Fifth Biennial Conference on Resting State / Brain Connectivity will be hosted by the Center for Medical Physics and Biomedical Engineering, the Department of Psychiatry and Psychotherapy, Medical University of Vienna and the Social, Cognitive and Affective Neuroscience Unit, University of Vienna, Austria.

The conference will be held at the University of Vienna, Austria, from September 21-23, 2016. The three day format of the meeting consists of lectures by world leaders in the field of resting state / brain connectivity.